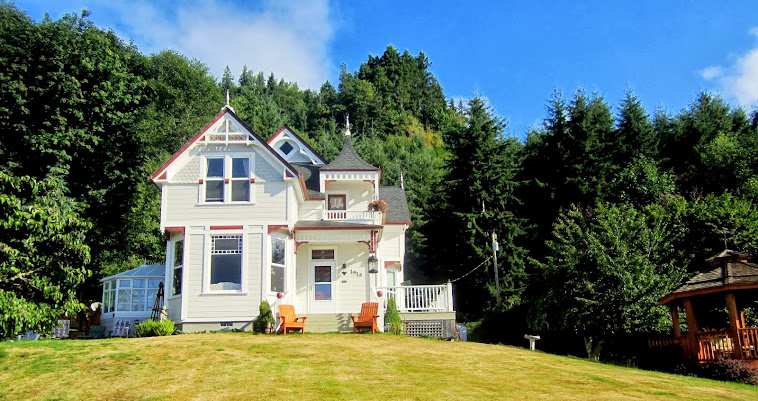 August
Just painting and more painting so far this month. We have one side of the house completely done and hopefully by weeks end we will be finished with it all..............well I can hope! We are really liking the color combination.  It took us a long time to figure it out and it was worth it. So glad we hired someone to paint the peaks!  It is way too high for us!
Posted by Linda 1 comment:

Well here we are at the end of July, and the weather this year has been crummy.  We did not have a chance to do much outside in the spring and the summer is not doing all that better.  Will re-cap the last few months.

May Spent most of this month putting in the shower in our downstairs bathroom.  We had lots of tile to lay and grouting to do, but in the end it turned out GREAT.  We love it!  Also worked on the fireplace surround.  Putting up the Connemara marble from Ireland was so satisfying.  I have wanted to do this for such a long time.  We ran out of the marble and will have to get about 4 more pieces. In between rain showers we put in another raised bed and got the garden planted.  We also re-painted and re-wired a chandelier and put it up in the dining room.  Painted and put a medallion on the ceiling too.  Except for the floor and decorating, that room is done! Brian's cousin gave us their old swing set and we now have a great place for the grandkids to play.  Brian re-stained it and now it looks new again! Still need to finish landscaping around it...but the kids don't mind how it looks!

June   Worked on some little finishing projects, like the threshold between our bedroom and bathroom, and putting up more of the trim in the upstairs bathroom, hung some pictures and a mirror. Got outside on a few of the nice days and did some yard work and got the flag pole moved over by the garden.  It looks great there!  We have 3 flags up there now, the American Flag, The Chinook Tribe and the 4 provinces of Ireland.

July   Back to scraping and painting the house.  We hired Chris D to do all the peaks as we do not really want to climb up that high on a ladder or crawl along the roof.  It is looking great. We are using 4 colors. a light grayish tan called Pewter Moon and a darker grey called Silver
spree. Then the trim around the windows is white and most of the gingerbread is a burgundy red.  I will post some pix soon!  One thing we had to do that was not so fun, was to tear apart the outside of the house because the new shower was leaking.  What a big job!  But it was better than tearing apart the tile.  Brian fixed the leak and we put it all back together again.  I bought an old table and sanded it and painted it for a vanity in the bathroom.  Also refinished and re-covered an old chair to match.  I have always wanted a vanity and now I have one.  We have also planted some bushes and have had fun harvesting some of our garden veggies.  The Dahlias are on early this year and are so colorful.  We have quite the crop. Bought all the flooring for the living room and dining room and will get it put in this fall.  Looking forward to that for sure...oh my aching knees! That is about it for now.....
Posted by Linda No comments:

Just figured out how to change the settings so people
could leave comments on the blog!  So go for it,
we would love to hear from you!
We have continued our restoration and have accomplished a lot on the past 5 months.  It's been busy around here for sure.  I had knee replacement surgery at the end of January, so I am still not doing ladders, but can do anything that does not include climbing.
Here are some of the things we have done:
November: Insulated the living room ceiling, then hired a friend of Heather and Adams that is a professional sheetrocker.......is that even a word?  Brian was his go-fer and they got all of the living room, dining room, stairwell and upper hallway done, complete with texturing, primer and a base coat of flat wall paint in a neutral color.  The house was so torn apart for the better part of two weeks, but the results were amazing! What a BIG difference it had made.
December: painted the wall by the fireplace green, and brought in the cabinets for the fireplace wall, also started painting and putting up the window and door trim in the living room.
January: Continued painting and putting up trim in the living room and dining room, put some insulation under the house...much more to do. Worked on finishing all of the trim in the kitchen including building a new utensil drawer, scraping, sanding and painting the rest of the wainscoting, and Brian built a great little knick knack shelf for me...even though he knows I will just fill it with "stuff". Painted the lower half of the dining room wall a dusty pink..looks great!
February: Tony (the sheetrocker) came back down for a weekend and did the back bathroom upstairs.  Brian did most of the painting as I was just not up to it yet.  Right now we are using it for a bedroom for a granddaughter as we have two of them living with us now...FUN! But this summer we will get the fixtures in and finally get that bathroom done!
March: Worked in the yard quite a bit as we had a week of spring like weather, nice to get outside. Also worked on finishing the trim in the conservatory and in our bedroom, nice to have those done. Lot's of cussing and caulking involved in putting up the crown molding in the bedroom...but it is so worth it.
April:  So far, this month has been spent painting and putting up crown molding in the living room.  Hired a pro to install it as it was a bit beyond us to do.  He did a GREAT job. Also painted more in the living room and upper dining room walls.
As we were painting today Brian commented that the old girl  (how we sometimes refer to the house) must be feeling better with all this new paint...and that we first had to start with putting a new hat and shoes on her!  (the roof and foundation)  It's a good comparison!  Soon we will have a true Painted Lady!
Posted by Linda No comments: